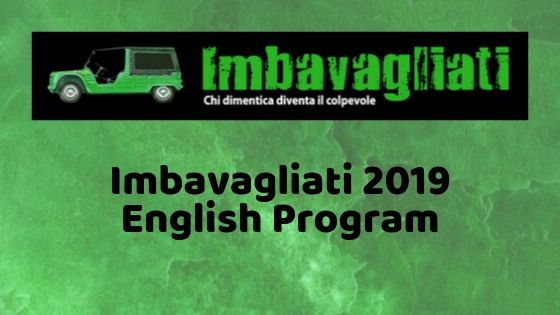 6pm / PAN | Palazzo delle Arti Naples
Inauguration of the 5th edition of “Imbavagliati – International Festival of Civil Journalism”.
Exhibition opening: “Uliano Lucas for Imbavagliati” and “5×5= a laugh will free you”
Speakers: Luigi de Magistris (Mayor of the City of Naples), Nino Daniele (Councilor for Culture and Tourism of the Municipality of Naples), Désirée Klain (artistic director of the Festival “Imbavagliati”), Vittorio Di Trapani (UsigRai Secretary), Claudio Silvestri (Secretary of the Unitary Journalists Union of Campania), Alessandro Sansoni (Member of the Executive Committee of the National Council of the Order of Journalists) and Paolo Siani (pediatrician and parliamentarian).
During the inauguration will be introduced by Roberta De Maddi (SUGC) the “Charter of Naples, rights and duties of the photojournalists“, the result of the work of the Commission for photojournalists of the Unitary Union of Campania Journalists and promoted by the Italian Press Federation.
There will be also the journalists/witnesses: Helena Maleno (Spain), Abdelaziz Yakub (Sudan), Jok Madut Jok (South Sudan), Maha Assan (Syria), Naziha Arebi (Libya) and Olga Rodríguez (Spain), together with the photographer Uliano Lucas and the illustrators Stefano Disegni, Fabio Magnasciutti, Mauro Biani, Enrico Caria and Riccardo Marassi.

10am / Sala Pan
Conference promoted by the Polis Foundation for the innocent victims of crime and confiscated property, dedicated to the massacre of innocents and violated childhood. The initiative is aimed at gathering ideas for the drafting of a regional law proposal dedicated to children and the promotion of reading points for children from 0 to 6 years.
The second part of the conference is dedicated to “Sudan: children in the trenches” with journalists/witnesses Abdelaziz Yakub (Sudan) and Jok Madut Jok (South Sudan). Intervention of Antonella Napoli, journalist, writer and analyst of international issues, Enzo Nucci, RAI correspondent for Sub-Saharan Africa, Father Daniele Moschetti, head of the Comboni Missionaries in South Sudan and Ottavio Ragone, director of the Neapolitan editorial staff of “La Republica” newspaper. The conference will be moderated by Claudio Silvestri, Secretary of the Union of Journalists of Campania. Illustrations by Fabio Magnasciutti.

5pm / Unitary Journalists Union of Campania (Vico Santa Maria a Cappella Vecchia, 8b)
“The Red Island, a forgotten country” – conference on Madagascar, one of the poorest countries in the world according to statistics where, since childhood, children suffer from growth disorders due to malnutrition and are subjected to continuous abuse. Speakers: Alessandro Greco, Vice President V.I.M. – Coordination of Italian Associations in Madagascar and Liliana Mosca Professor of History and Institutions of Contemporary Africa at the Department of Political Science.

10am / Sala Pan
“Afghanistan, Syria and Libya: children on the run“. Moderated by Désirée Klain, artistic director of the “Imbavagliati” Festival together with Claudio Silvestri (Secretary of the Union of Journalists of Campania). Illustrations by Riccardo Marassi.

Afghanistan – The Afghan writer/witness Alì Ehsani will intervene with the journalists Barbara Schiavulli and Tiziana Ciavardini, specialized in the Middle East question.

Syria – intervention of the Kurdish-Syrian writer Maha Hassan, threatened by the regime. The Italian-Syrian journalist, writer and activist Asmae Dachan, the head of Syria at the Iraq, Middle East and North Africa Observatory Fouad Roueiha and Ilaria Urbani, editor of the newspaper “La Repubblica Napoli”, will present an “Italian” view of the situation. The reporter and writer Marco Cesario will moderate the conference.

Libya – The protagonist of the meeting will be the British director of Libyan descent Naziha Arebi, who will present for the first time in Napoli a preview of an extract from the her documentary film “Freedom Fields“, reported by the British newspaper “The Guardian” among the ten films of the year. Intervention of Mirella Armiero, Editor-in-chief of the Culture section of the “Corriere del Mezzogiorno”.

5pm / Unitary Journalists Union of Campania
Reading and dialogue with the public with Giuseppe Goffredo, author of the poetic text “In the lost voices of the sea” on the theme of the “shipwreck of the species that refuses to get on the shore and is shipwrecked after every shipwreck, forgetting its own humanity”. Together with the author, intervention of Désirée Klain, artistic director of the Imbavagliati Festival, and Claudio Silvestri, Secretary of the Union of Journalists of Campania.
There will be also the introduction of the novel “The drums of love“, written by the journalist/witness Maha Assan, which offers a range of opposing yet understandable positions during the war in Syria: those of activists, those of who lost loved ones during the guerrilla, those of intellectuals, and gives everyone the opportunity to get an idea of what is happening in a place much closer to us than we believe.

Monday 23rd of September – 34th anniversary of the Siani Award
in memory of the journalist Giancarlo Siani, brutally murdered by the Camorra.

11am PAN | Palazzo delle Arti Napoli
Siani Award Ceremony in which are involved journalists, writers and students.
Presentation of the “Giancarlo Siani Foundation” and inauguration of the Hall of Memory dedicated to all the innocent victims of crime, a union between Giancarlo’s Mehari and the exhibition “NONINVANO” which depicts the faces of the victims themselves.

3pm PAN | Palazzo delle Arti Napoli
Round table on the topic of freedom of information, with the participation of representatives of Neapolitan newspapers and the prize-winning authors awarded during the morning ceremony.

“Resist, Resist, Resist!”
The second part of the conference is dedicated to the memory of the magistrate Francesco Saverio Borrelli, former head of the Mani Pulite pool. There will be some members of the civil resistance who have distinguished themselves for safeguarding the rights of migrants such as Rosa Maria Dell’Aria, the Sicilian professor suspended for “not having supervised the work of her students who, during the Memorial Day, had presented a video by combining the racial laws with the security decree”, and the French-Italian musician Sandro Joyeux, who has always been close to the theme of migration making tours for African workers in the camps and for migrants in reception centers. Intervention of: Giuseppe Giulietti, President of the Italian Press Federation, Raffaele Lorusso, general secretary of the FNSI, Carlo Muscatello, President of Assostampa Fruili Venezia Giulia, Enzo D’Errico, director of “Corriere del Mezzogiorno” and Claudio Silvestri Secretary of the Union of Journalists of Campania. There will be also the presence of Italian threatened reporters Sandro Ruotolo, Francesco Piccinini and Rosaria Capacchione.

This website uses cookies to improve your experience while you navigate through the website. Out of these, the cookies that are categorized as necessary are stored on your browser as they are essential for the working of basic functionalities of the website. We also use third-party cookies that help us analyze and understand how you use this website. These cookies will be stored in your browser only with your consent. You also have the option to opt-out of these cookies. But opting out of some of these cookies may affect your browsing experience.
Necessary Sempre abilitato
Necessary cookies are absolutely essential for the website to function properly. This category only includes cookies that ensures basic functionalities and security features of the website. These cookies do not store any personal information.
Non-necessary
Any cookies that may not be particularly necessary for the website to function and is used specifically to collect user personal data via analytics, ads, other embedded contents are termed as non-necessary cookies. It is mandatory to procure user consent prior to running these cookies on your website.
ACCETTA E SALVA
Share This